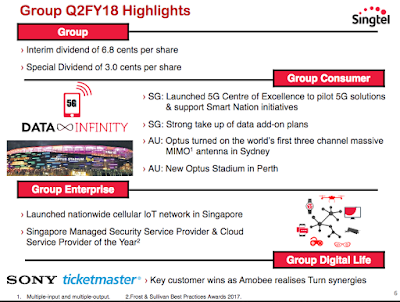 Net profit of S$2.9 billion was recorded in 2QFY18, with the recognition of S$2.0 billion divestment gain from Netlink Trust. If we were to exclude the one-time gain from Netlink Trust, the underlying net profit for 1H2018 of 929 million is however, 4.1% lower than 1H2017's 969 million. It's also noted that the competition in India continues to affect the profit for Singtel.

With a special dividends of 3.0 cents, they've paid out 489.84million in dividends out of the S$2.0 billion divestment gain, which is about 24.4% of the gains. The remaining balances are used for debt repayment to lower gearing and to improve FCF.

Airtel has also announced on the merger with Tata Teleservices' consumer business earlier last month. The proposed merger will include transfer of all the customers and assets of Tata to Airtel, further augmenting Bharti Airtel’s overall customer base and network. It will also enable Bharti Airtel to further bolster its strong spectrum foot-print with the addition of 178.5 MHz spectrum (of which 71.3 MHz is liberalised) in the 850, 1800 & 2100 MHz bands.

Singtel's Australia associate, Optus, has reported a fall of profit to $347 million despite network investments delivering 75,000 new 4G customers which is due to the lower equipment sales as customers held out for anticipated smartphone launches as well as adopted more handset leasing plans.

I believe that even with the upcoming drop in net profit, it should not be a very big issue for Singtel. In time, when the India telco recovers, I believe that it will be able to cushion the fall of profit from TPG's entrance.

Singtel is currently trying to channel much of their businesses towards ICT transitioning out of the standard mobile communication business. The focus on ICT along with the diversified portfolio and healthy balance sheet, Singtel remains as a relatively good company for me.

I continue to love Singtel and would be glad to accumulate more of Singtel should the price fall.

Email ThisBlogThis!Share to TwitterShare to FacebookShare to Pinterest
Labels: SingTel