A lookback into 1997 Asian Financial Crisis

This post today is another study on the financial crisis from before.

Remember on 19 October 1987... The Black Monday strikes? Let's fast forward to 10 year later, in the summer of 1997. In the beginning of July 1997, the East Asia is battling with a rising fear of worldwide economic meltdown. This Asian Financial Crisis is a series of currency devaluations. This had it turn caused the stock market to collapsed.

The Asian Miracle is a name used to describe the economic growth of East Asia. For 30 years, the growth rate of Thailand, South Korea, Hong Kong, Singapore, Taiwan and Indonesia had maintained a very high growth rate of 8-12%. This is attained by high interest rates which is used to attract foreign investments. The foreign investment also allows rapid industrialization.

The high exposure to foreign investments also brings them a bigger risk to forex movements. As the US economy recovered from a recession and aftermath of Black Monday in early 1990s, U.S begins to increase the interest rates. This inevitably caused a problem for countries in Asia that are exposed to foreign investments and the U.S becomes a more attractive investment destination.

Background/Causes - Thailand
It all started in Thailand. In 1985 to 1996, Thailand's economy grew at an average of 9% per year. The highest economic growth rate of any country at the time (Japan is knocked out by the popping of their asset bubble. Inflation was however kept reasonably low between 3.4-5.7%. The Real Estate sector is also booming with speculations. However in early 1997, the exports decline. Exports is an extremely sector that contribute to a significant portion of Thailand's economy.

In May 1997, the Thai Baht was hit by massive speculative attack in view of the weaker economy. In spite, of the attack the Prime Minister of Thailand announced that they will not devalue Baht. Thailand, however, lacked in foreign reserve to support the peg between USD and Baht and the government was forced to float the Baht allowing the Baht to be set by the currency market.

The currency market failed in Thailand as a result of the government's decision to no longer peg the local currency (Baht) to the U.S dollars due to insufficient reserves. Since the U.S is now a better destination for investment, investors withdraw from their investment in Thailand and flock to the U.S. This event had caused the baht reached it's lowest point at 56 to 1 USD.

From 25 to 1USD to 56, it had made foreign loan extremely costlier for Thailand. This event had caused the biggest financial company in Thailand - Finance One to collapse. Fear has strike and investors are in a panic and started pulling money from the Thailand market.

As a result, Thailand had accumulated a heavy bag of foreign debt that effectively bankrupted the country. This event had ended Thailand's booming economy.

In short, using a simple diagram: 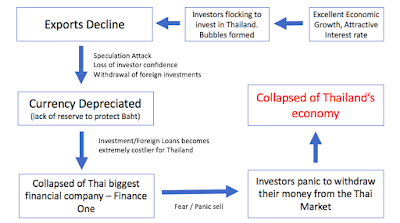 Indonesia
Indonesia, a country that has the largest economy in the Southeast Asia, is next to feel the wave. Just before the AFC, Indonesia is in good shape due to the low inflation and huge foreign reserve along with the good banking systems. Rupiah has also appreciated from the loans taken by foreign institute. However, just after Thailand floated baht, Indonesia responded by floating the rupiah too and had widened the band from 8 to 12%.

Unfortunately, rupiah is next in the severe speculative attacks which devalued Rupiah to a greater extent. Similarly, the cost of foreign debt and investments becomes costlier and Rupiah has dropped from 2600 to 1USD to 11000 to 1USD. As a result of the falling Rupiah, the Jakarta Stock Exchange is also affected and touched it's historic low. 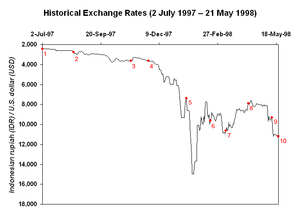 South Korea:
The domino effect has spread from Thailand to Indonesia and South Korea is next. They've great conglomerates owned by government. However, as many of the corporations are busy with building great conglomerates to compete on world stage, the Koreans are not left out. They've been aggressively expanding their businesses, funded by loans. The conglomerates does not earn sufficiently to pay off their loan. This has resulted in non-performing loans and is burdening to the banking sector.

The shortage of foreign currency caused the value of won to devalue from 800 to a low of 1700. And due to low reserves that South Korea has, the devaluation of won and non-performing assets, South Korean market plunged and many countries bankrupted. IMF stepped in to provide US 57billion as bailout package, with conditions of the Koreans to adhere to. An example of company that has bankrupted in AFC is Daewoo Motors and they're taken over by General Motors.

Philippines:
In response to the crisis in Thailand, the country's central bank raised interest rates to defend the peso. Stock market crashed and fell from 3000 to 1000 points. Huge outflow of money


Hong Kong:
The Hong Kong dollars come under speculative pressure soon after. Due to the inflation rate in Hong Kong being significantly higher than the U.S. As Hong Kong had a huge foreign reserve, they manage to maintain the peg. To protect the currency, the interest rates increased from 8% to 23$ overnight. This in turn caused the stock market to be extremely volatile and in 3 days, Hang Seng Index dropped 23%. The rate hike had caused the market to spiral downwards and many speculators had shorted the shares on Hang Seng Index. The HKMA and Donald Tsang (Financial Secretary of HK) since declared war on speculators with government buying US 15 billion worth of stocks in many companies.


Malaysia:
Similarly, the Ringgit Malaysia is attacked by speculators after the Thai Baht. Overnight rate jumped from 8%-40%. This has caused the massive sell down in the stock market by which it fell by 50% from 1200 to 600.

Malaysia prime minister, Mahathir had introduced strict capital control, stopping of overseas trade by making the RM invalid. Currency/investments aboard for residents is also controlled. The decision to make RM invalid in overseas trading has caused the short-sellers to buy back RM at a higher price. Hence, making it a bad investment for them. CLOB counters is also suspended, and $4.5 billion worth of shares is suspended, affecting many Singaporeans that are invested in CLOB.

The plunging of economy has caused the Malaysia to enter into their first ever recession. All sectors were hurt in the falling economy. Foreign investment in Malaysia since the AFC is mostly avoided from how they dealt with the CLOB counters. Till date, the economy has not recovered to pre-crisis level.

Singapore:
Singapore is less affected by the AFC. However, as the crisis is spread to Singapore, Singapore entered a short bout of recession. The MAS had allowed a 20% depreciation to SGD to cushion the economy for a soft landing. However, the STI is left unattended to, falling from 2,000 points in closing at a low of 848 points on October 1998. 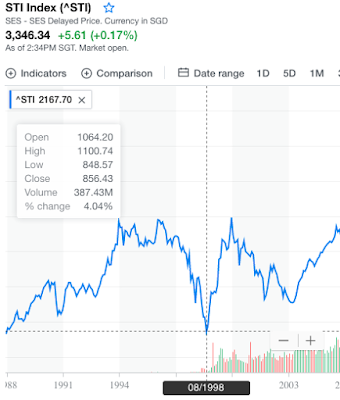 U.S:
The U.S is also affected, but least affected. This is caused by the worries that arises about Asian economies with DJIA plunging 7.2% on October 1997.